Thanks to @scott, @dylanv, and the others who contributed to this post. 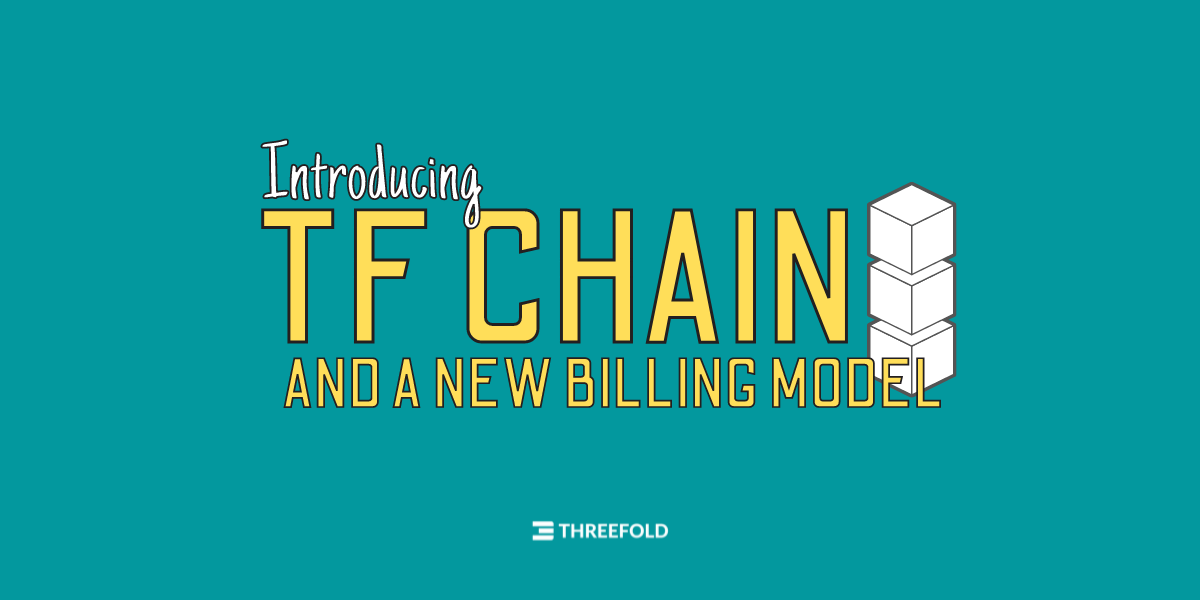 One of the unique things about ThreeFold technology is that cryptocurrency was adopted into the system because it was the best way to achieve certain larger goals, rather than starting with a desire to apply blockchain technology into a new domain.

For Zero OS to operate autonomously, it needs to be able to verify payment when executing the deployment instructions it receives, and a blockchain is the perfect way to accomplish this in a universally accessible way that doesn’t rely on legacy financial infrastructure.

Smart Contract for IT

Before Grid 3.0, we used a system called “blockchain database” in order to store and verify deployments, along with transactions in TFT on the Stellar network. Through cryptographic security, nodes executing workloads are able to verify that the instructions they receive have not been tampered with, because they are signed by the same entity that made the payment. This system offers an unprecedented level of assurance that only the intended code is being executed in a cloud environment, which we call Smart Contract for IT.

However, it still relied on a centralized server to store information, and the prepaid billing model presented complications including the heavyweight task of hosting a Stellar node for the Grid to improve performance.

To move forward, ThreeFold developers decided to leverage the Parity Substrate framework. Using Substrate provides a solid foundation and enables development to move much more quickly than starting from scratch. It also means that our chain could someday become a parachain on the Polkadot network, providing seamless bridges to other connected chains. For now, TF Chain is operational for our Grid 3.0 devnet, and we’ll be growing out a set of independent validators from the community to provide a truly decentralized structure for the mainnet release.

The new chain has its own native form of TFT, which can be bridged back and forth from Stellar-based TFT and potentially TFT on other chains in the future. Conveniently, Polkadot’s browser extension wallet can be used for TF Chain, for a secure and friendly user experience. The chain also provides a database to store the necessary information for farmers and Grid users to interact, along with a smart contract billing system that’s much simpler than the existing system.

In order to register a farm on TF Chain, farmers use a small amount of TFT and a signature from their private cryptographic keys. The chain returns their farm id, which is then provided to the farmer’s nodes during the boot process. This process can be integrated into a simple decentralized web application enabled by the browser extension wallet in a few steps.

Those deploying to the Grid must first register an identity that simply links their wallet account to their Yggdrasil IP address, in order to facilitate communication with nodes during the deployment process. Behind the scenes, each deployment is registered on chain with a fingerprint and signature that provides tamper proofing as well as billing authorization.

TF Chain enables a new billing model, where deployers authorize a smart contract that allows nodes to bill their wallets directly on an incremental basis according to how much capacity is being used. Deployers may choose to fund their wallets with large or small amounts at a time, according to their preferences. This method also enables the discount model, based on the amount of tokens present in a user’s wallet, that will be included in changes to the TFT tokenomics in Grid 3.0.

Creating a custom blockchain for the ThreeFold Grid also provides great flexibility going forward. TF Chain could potentially be used for accounts and authorization within services built on top of the Grid, or include new billing features to support the needs of the greater ecosystem. In the meantime, it represents a leap forward for simplicity in payments for capacity reservations and a move towards greater decentralization of the systems that support the ThreeFold Grid.

For more technical community members, you can watch our development progress in our github repository for TF Chain.

Is this actually working on testnet? How many Validators are needed to run this atm. Are there incentives for running a validator (like there is with the POC for node owners)? Curious to lern more about that.

We currently have a running devnet, so no testnet yet. Somewhere later this week or next week we will launch a testnet.

The amount of validators is chosen by the Threefold Foundation, we do not incentivise others to run a validator on our testnet that still has to be released. In later iterations this might change, we will keep you posted.