A Personal Story: My ThreeFold Journey / My Why

The other day I felt inspired to write, and here’s what came out! I wasn’t sure where to publish, maybe it can go on our blog, for now I am sharing here. Hope you enjoy.

and I wonder what it might inspire for some of you!

I remember meeting Kristof (De Spiegleer, ThreeFold co-founder) on a beach in Cambodia in 2019 like it was just yesterday. It was serendipitous, for many reasons. I wasn’t supposed to be there, but an unfortunate event for my traveling partner at the time meant that she had to go back home and I stayed a few extra weeks. He’d been trying for years to get to Cambodia, and finally managed to do it. So, our paths crossed in that however unlikely place and time. Fate, you might call it.

We connected immediately over our views on the world and our desires to bring positive change. I shared my story, having left my comfortable life in New York City behind, in the pursuit of the unknown but ultimately to broaden my perspective and rediscover my sense of purpose. Then, he dropped the figurative bomb, “I have a project I think you should know about. We’re building a new Internet.” At first, even though I’d spent the eight years before I left America working in the social media advertising space, I had literally no clue what he was talking about. But soon it became clear.

He explained his backstory, having been involved in the early Internet and Cloud. He built some of the first data centers in Europe, had sold a few companies in Silicon Valley, even spent New Year 2000 (Y2K) inside of a data center awaiting impending doom that never was. He’d been around when the Internet was first created and went on to build some components still used today. When he spoke about the early Internet, his eyes lit up. It was free, it was open, it was exciting. People were connecting servers from their homes, building, sharing, exchanging – together creating a new digital world, the first digital world. As the Internet took off, big corporations were launched to help meet the demand but inevitably the centralization of the Internet had created a system that turned people into products, cogs in a big money-making machine owned by the few. All that beauty of the early Internet had disappeared. And he, along with his team of experienced early Internet pioneers and a community of believers, were intent on returning to that vision and making it a reality. 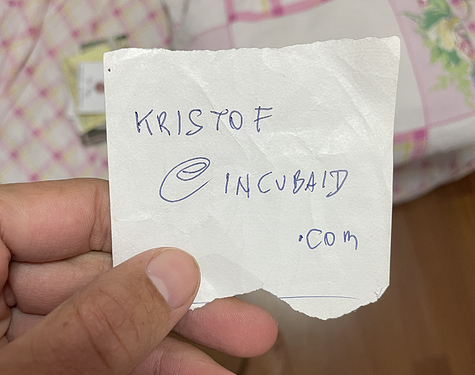 kristofatincubaid2993×2359 2.01 MB
A piece of paper Kristof gave me before he left Cambodia.

To be honest, I can’t say I totally understood even after that first conversation. (How could I?) But what I did know for sure was that this man had a huge heart, the right intentions, and he knew exactly what he was talking about and how to make it happen. I had to be a part of this dream. So I jumped in with both feet.

Fast forward a couple of months, it’s July 2019, and Netflix premiered a documentary called The Great Hack. The film explored how a data company called Cambridge Analytica came to expose the negative effects of social media, primarily as it related to the 2016 U.S. presidential election. (If you haven’t seen it, go watch it, and also The Social Dilemma.) Not only did it crystalize my belief that ThreeFold was working on something incredibly important, but it showed that the problem we were solving was on its way to becoming widely accepted and recognized, to becoming “mainstream.”

But, why do I share this story with you?

ThreeFold is a complex project, and it’s not for everyone to understand from top to bottom. We’re building a new Internet, after all. But the problem is simple. Today’s digital world is not safe, it’s not private, and it’s not equal. (The Internet is access to communication and information – basic knowledge that can save lives and create incredible opportunities – and billions of people today do not have affordable access to the Internet – still! In 2022!) Nearly all of this has to do with the Internet’s centralization, the fact that most of the underlying infrastructure and most of the major platforms we use are owned by huge corporations who do not have the best interest of us, the “users,” in mind. And what’s the difference in the end between the digital world and the physical world, really? If we live in an unsafe environment or when our privacy is invaded or when we experience inequality in the real world, we can understand that this is not just nor fair nor should we simply accept it. So why then would we just “accept it” in the digital world?

And what we’ve experienced until today, the ads, the algorithms, the surveillance, the hacking, it’s all just the beginning if we continue down the path we’re on. You’ve heard about Meta’s plans for the metaverse? You know what’s happening in China? You’ve seen The Matrix? Well, my friend, the choice is yours – the red pill or the blue pill?

Of course there are many solutions out there today, like using Signal instead of Facebook Messenger or using Brave instead of Chrome, or using a VPN, or … But ultimately all of these are just putting band-aids on a much bigger problem which can only be solved by together building everything all over again – on top of an infrastructure owned not by big corporations but by the people. And that’s what Kristof and the early team recognized a long time ago. And that’s what we’ve been up to. And that’s what the community has put so many resources – time, effort, and money – into over the past years. And that’s what we are going to do. No matter what it takes. It’s time for an Internet upgrade. It’s time for an Internet ®evolution.

There’s so much to dive into with this project. And it’s still quite technical for most*. This isn’t the time or place to explain all of it. But believe me, no matter who you are, if you believe what we believe, there is room for you today. To join the community, to ask questions, to spread the word. To connect a server from your home and contribute actual capacity to this new Internet for the people around you…

It will be a long journey. And it’s going to take a lot of people. A collective. But remember the power of the collective. As we say in the community, together we build. Together, this will happen.

*If you are technical, if you’re an open-source builder, I encourage you to dive all that’s been created today – most notably the ThreeFold Playground. It’s a sandbox of limitless possibilities for those with the right knowledge. It’s time to build!