Mastodon + ThreeFold 101: What is Mastodon and how can ThreeFold support? 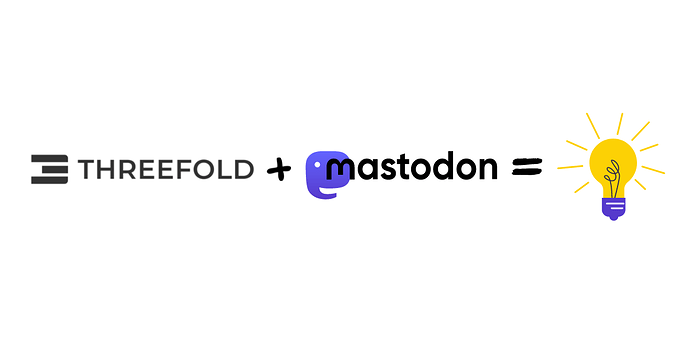 Over the past two weeks, Mastodon has been getting plenty of attention and it’s been a big discussion in the ThreeFold community. I figure some people still have a lot of questions about Mastodon and also how it’s related to ThreeFold, so wanted to build this resource:

Note: This is a work in progress. Please feel free to chime in with additions or edits in the comments below.

Mastodon is a decentralized micro-blogging platform. It looks like a Twitter clone at first glance, but beneath the surface, it’s set up as a federated network that operates in a similar way to email. When joining Mastodon, you create an account on a specific server (similar to choosing an email service), then communicate with people in your server or any other server within the fediverse (same with how gmail users can communicate with hotmail users, etc). Take a look at this beginner’s guide to Mastodon if you want to go deep.

Why are people flocking to Mastodon?

With Elon Musk’s acquisition of Twitter becoming official at the end of October, many people have become uncomfortable with the idea of one single person, a controversial billionaire at that, having that kind of power and decision-making over a platform which is viewed as a global town hall.

So why all the different servers to choose from?

Different communities are referred to as instances or servers – each of which is run by an individual or group of people who set their own rules on signing up, moderation, etc. This means that anyone can choose which server they want to be a part of (often time this comes down to matching values or geographies). You can sign up for one server and move later on, and as mentioned previously, you can communicate with people from other communities within the fediverse.

OK, so what is the Fediverse?

The fediverse is an ensemble of federated (i.e. interconnected) servers that are used for web publishing (i.e. social networking, microblogging, blogging, or websites) and file hosting, but which, while independently hosted, can communicate with each other.

On different servers (technically instances), users can create so-called identities. These identities are able to communicate over the boundaries of the instances because the software running on the servers supports one or more communication protocols that follow an open standard. As an identity on the fediverse, users are able to post text and other media, or to follow posts by other identities. In some cases, users can show or share data (video, audio, text, and other files) publicly or to a selected group of identities and allow other identities to edit other users’ data (such as a calendar or an address book).

And how does ThreeFold fit in?

ThreeFold provides a reliable decentralized infrastructure that Mastodon and the rest of the platforms within the Fediverse need, and we think those communities will be super interested in our broader vision as well.

Really, this mass exodus from Twitter is more proof (a la people leaving Facebook in droves or moving from WhatsApp to other messaging tools) that the world is increasingly ready for decentralization and what ThreeFold enables.

What are some issues Mastodon faces and how can ThreeFold support?

First, you have to rely on someone’s server but how can you trust this server is going to be safe and reliable? You could lose your online presence / identity if the server fails. Additionally, there is no general moderation, so no protection against hate speech unless the server moderator tackles it – but then it becomes highly subjective. And finally, it’s complicated for most people. If you don’t want to lose your data, you have to host your own server, which most people don’t want to do.

Well, ThreeFold is making it very easy for anyone and everyone to create their own server through the ThreeFold Playground, so they are in full control. And it’s on decentralized infrastructure.

Additionally, we’ll make it possible to co-own communities via smart contract, so if some nodes leave or go offline, the server is still viable. So any group of people can chip in some money and co-own your own Mastodon server. By creating your own community, as of Grid 3.8, you will also be able to ask people for contributions in order to operate the server, etc. And you can set and maintain your own moderation standards.

Lastly, we’re going to focus on authentication. Today it’s only email based, which means it’s easy for people to hide. ThreeFold could enable different verification options – email-based, TF Connect, and even TF Connect + KYC. So each server can have their own standards.

So, what is being done, and what more can be done?

Let’s remember though to always be authentic and organic, not intrusive or spammy. We’re all part of the same community even if we don’t know it yet, people who believe in a decentralized future and are taking action to make it a reality.

Again, please suggest edits or additions in the comments below or by reaching out to me directly here on the forum or on Telegram (@samtaggart).

the possibilities thanks to the smart contract for IT for the Mastodon use case is a new insight for me. Is indeed very interesting.